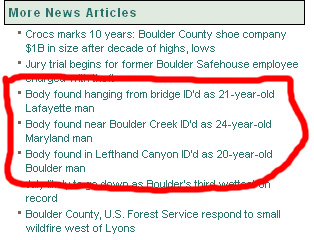 A few days after the guy open fire in the movie theater in Aurora, Colorado, there was a seeming spike in suicides of young males in nearby locations.

The image on the left was captured this morning from the Boulder Daily Camera’s (newspaper) website.

The guy in the movie theater killings obviously didn’t have anything left to lose.  He may as well have committed suicide, especially since he’s probably going to get the death penalty.

It’s interesting that they are all young males between 20 and 24.   The burning question in my mind, which will never be answered is why? Was it just a coincidence the three suicides occurred withing a few days of the movie theater incident?  Or was it a trigger?

It seems like a shame.   Living in this world is getting more difficult for a lot of people.

It’s been interesting living up here in the beautiful mountains.  A lot of people come up from the city to die here.