In July I met up with Rob and Sherrie and we hiked to the site of a plane crash.  The crash occurred in October, 1970, and was carrying half of the Wichita State Football team to a game in Utah.  There is still a lot of wreckage that was not removed from the site, which is pretty typical of mountain plane crashes of the past.  Now days all but a few crumbs would be removed. 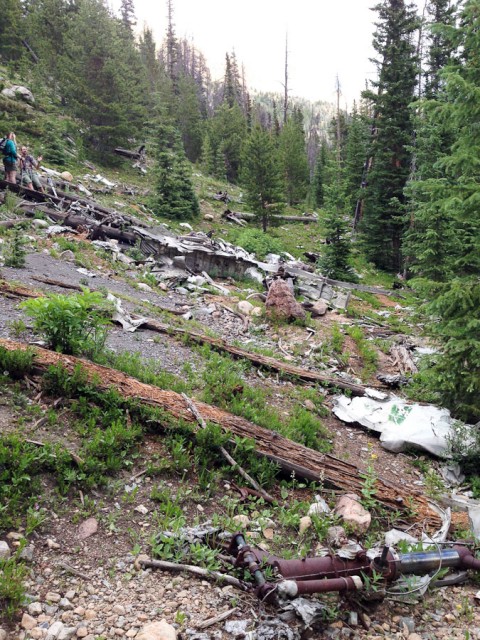 I’m standing where the nose would have been, looking back towards the tail.

It is assumed that many survived the impact of the crash, but didn’t survive the subsequent fuel explosion.  Pilot error was blamed for the crash. 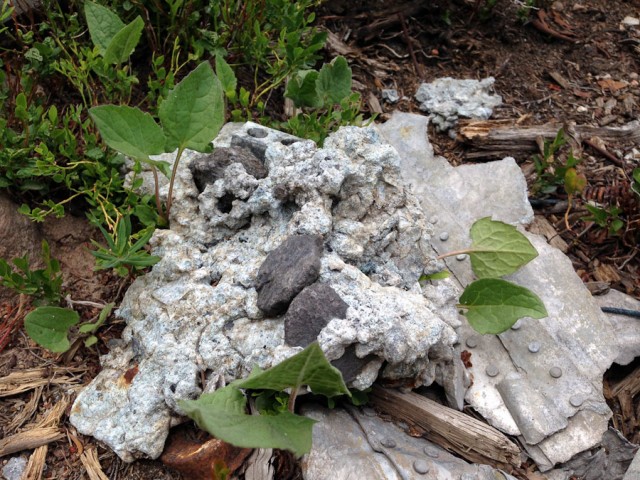 Molten metal from the heat of the explosion pooled around stones.

There are many more details in this Wikipedia article, including the type of plane, cause of crash, etc.

The following week,  my step-sister and her two daughters passed through Grand Lake, Colorado, on their way back to Chicago.

I met up with them and we spent the day on the west side of Rocky Mountain National Park. 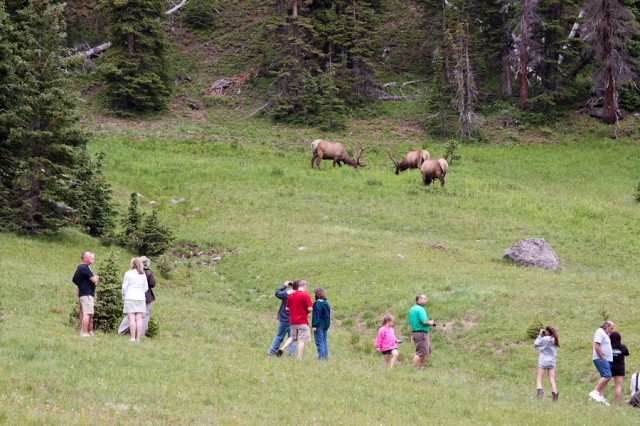 Even though there are signs all over the place saying “Don’t approach wildlife. Stay on road.” Nobody seems to mind the signs. They all want to be the next award winning nature photographer.  The elk don’t look too concerned because they have habituated to humans.

The next 10 days I was very sick with a West Nile Virus relapse.  There were two distinct episodes separated by four days.  I don’t know if it’s an actual reinfection or whether, due to the West Nile exposure, I’ve developed a bad allergy to mosquito bites.  I’m still not feeling 100%.  I can tell when I ride my bicycle up out of the valley… what used to be a fairly easy ride is still pretty difficult.

On to the next track…

I recently purchased a Raspberry Pi.  The Raspberry Pi is a small Linux based computer, about the size of a deck of cards.  It was about $50. For people that only use a computer for writing a few documents, web browsing and email, this is all you’d need.  Well… you do need a monitor/TV, keyboard and mouse for that. 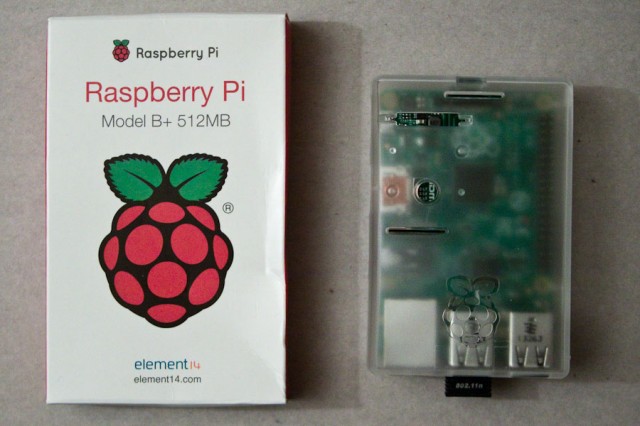 Rapsberry Pi computer on the right.

For my purposes, I won’t need any of that. Eventually, it will be programmed to act as a web server that monitors a variety of wireless sensors in a boiler room.  When any of the sensors goes out of range, it will send an email or text message alerting people to a problem. So all it needs is a internet connection and power.  There’s a WiFi adapter plugged into the bottom (the black thing).

I get so tired of the “gotta upgrade” cycle,  buying updated computers, printers and software.  I bought a really powerful computer 8 years ago.  It’s still plenty sufficient for my needs because email is the same as it was 20 years ago, word processing is the same as it was 20 years ago, and even circuit board design is the same as it was 20 years.  The only thing that’s changed is the phased-out product support which forces you to buy the same capabilities all over again. My 8 year-old laser printer still works perfectly, but HP has stopped making toner cartridges for it, so I have to throw it away and buy a new one.  It keeps the Intel, Apple, HP and Microsoft shares going up in the stock market, but offers nothing but window dressing and a new look for the consumers.  There’s no real increase in capability.  Most of the software that runs on Linux is free and always has been.  The only advances in computing have been with lower cost (unless you’re Apple: $2000 for a 15 inch Mac Book Pro?), lower power consumption and smaller size, and the Raspberry Pi is indicative of that.

This past week I did a repair trip to northeast Colorado, Nebraska, Wyoming and back to Colorado.  Along the way I worked on pinball machines and jukeboxes.  One of my tasks was to repair a Bally bingo machine from the 1950’s.

A bingo machine is shaped like a pinball machine.  You shoot a ball up and there are 20+ holes for it to drop into, which lights a light on a bingo card on the backbox.  They are basically gambling devices and were probably outlawed in many states.  You can increase your payout odds by adding coins, sometimes up until you’ve shot the 3rd or 4th ball.  You win credits for getting various things in a row, or 4 corners, etc.  The credits can be applied to subsequent games or redeemed for prizes or money. 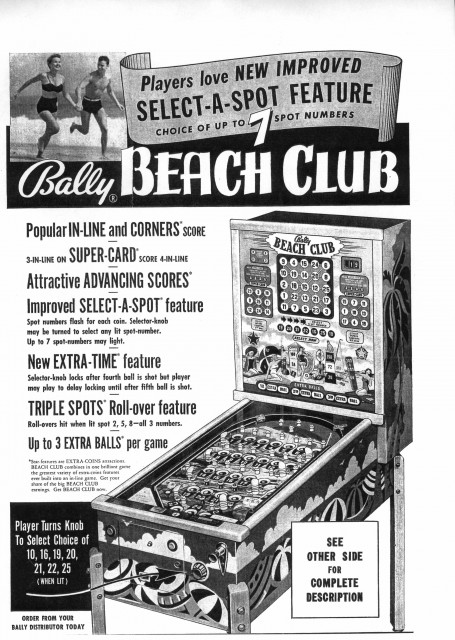 To quote Russ Jensen, a  guy who is very familiar with the operation of these machines, “These games are by far the most complex of any electro-mechanical game ever devised.”  After trying to fix one, I’m in total agreement.

The day after I worked it, I was in Cheyenne to work on a jukebox.  The guy has an old friend who has a collection of these in his daughter’s basement and he wants to sell the entire lot of 30 to 40 machines. 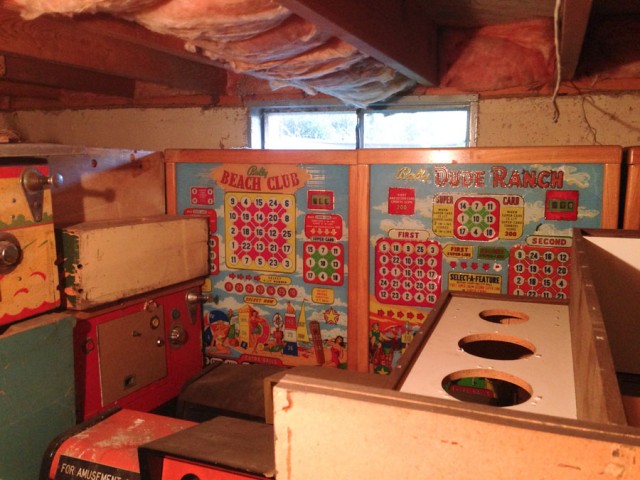 Just a few of the antique bingo machines stacked in a heap in this basement.

The backboxes were stacked along one wall and the playfields and cabinets were stacked separately, 8 to 10 high. It was very difficult to tell what was in the heap and what condition any of it was in.  Nothing looked like it was in pristine condition, but the games looked like they could be put together and restored.  There were a number of duplicate games; for example I think I counted 5 Beach Clubs.

There were also old slot machines that used lights instead of reels and paid credits instead of coins, a few blackjack video games, and a couple of jukeboxes.  There was a fair amount of junk. 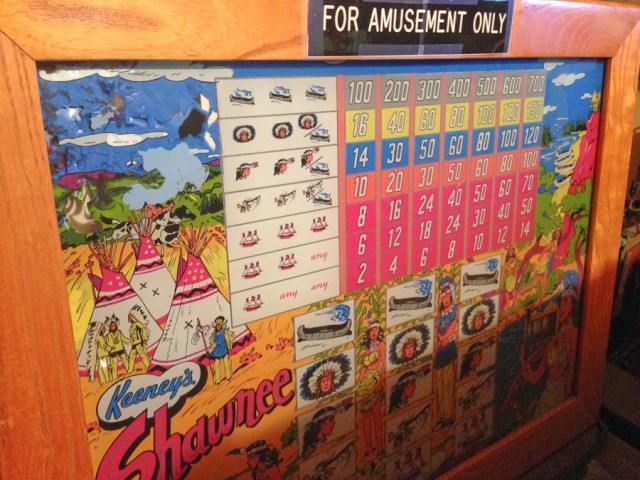 A slot machine that uses lights instead of reels, and pays credits/score instead of coins.

Since returning from the trip I’ve been researching bingo machines and watched videos of how you play and repair them. With my intrigue over the electro-mechanical operation of these things, I’ve become a little enamored with them.  I’d love to breathe new life into them, restore, and sell them. They’re pretty unique.

But when I work-out the realities of buying this collection, it doesn’t make any sense.  First, probably half of the machines will be used to make the other half work.  Second, there is very little demand for any of this, including the jukeboxes.  Little demand means low selling prices.  Probably not very much to cover the time I’d put into them.  On top of that, I’d have to store these while waiting for restoration which means renting a storage room.  When I add up the other costs of renting a truck, driving to Cheyenne, paying some people to help me drag all of this very heavy stuff out of their basement and unloading here in Colorado, it gets expensive.  I barely have any free time as it is, so maybe I’d only restore a few per year.

Reluctantly, I’ll have to leave this little silver mine for someone else, though I don’t know who.   There aren’t many collectors of this stuff and even fewer know how to fix them.  I’d bet there’d be some interest in Europe.  Some of the most prolific collectors seem to be over there.   But the shipping costs make it prohibitive. I don’t know how much the owner is expecting to get for the collection, we didn’t talk price.  He’s leaving it up to his son and daughter.  They’re going to talk and get back to me with a price.  At least with a starting price, I can point interested parties in their direction.