There was nothing morbid about it.  I wanted to visit the site of a plane that had crashed 40 years ago in the wilderness, where the wreckage still remained.  One of the main reasons this interested me: it was going to be a very challenging hike physically, also one where I would have to plot the course myself since there are no trails to the site.

Well actually, the route started at a very popular trailhead, and the first couple of miles were spent passing people and their dogs on the trail.  I wasn’t in the mood for people.  I couldn’t wait to take the detour that would take me off the trail, up steep mountain sides, past beautiful unnamed lakes, and over snowfields where very few people tread. 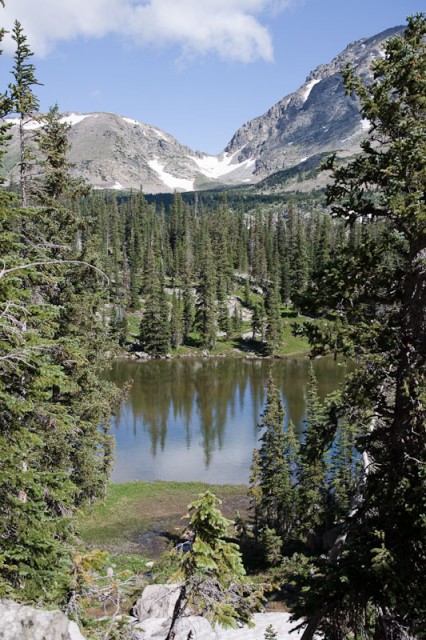 Unnamed lake looking towards South Arapaho Peak, the one I climbed a few weeks ago. 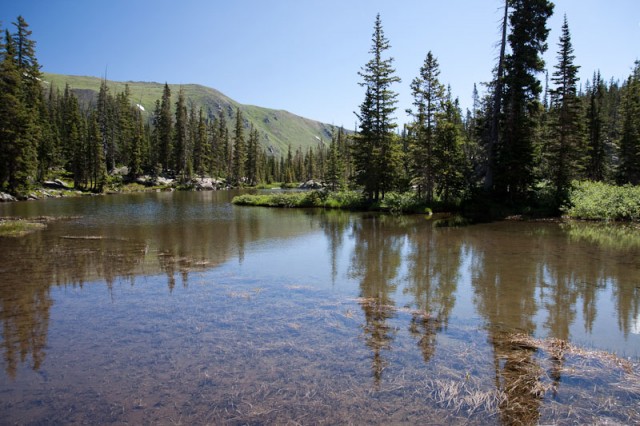 As I sat resting on a boulder next to this lake, I thought to myself, if this is all the further I go, the hike will have been worth it.  It was serene.

I continued on up the mountainside for probably another hour, having doubts that I would have the energy to make it.  After crossing several slippery snowfields and climbing some scree fields, I paused by a small pond and looked up the mountainside at the route ahead and decided to stop.  My GPS told me the plane crash was still 3/4 of a mile up.  I decided to stop and not go further.  I snacked and rested.  I pulled out my digital thermometer and it read 66.6 degrees.  I wondered if anyone had died in the plane crash.

I finally pulled out the map and realized that I had already climbed 95% of the distance in terms of elevation, that if I continued another 100 yards, the remainder of the hike would be mostly level next to a lake.  I plotted a course over the remaing boulder and snow fields.

I finally reached the top of the “shelf”.  Now it was a level half-mile walk to the crash site. 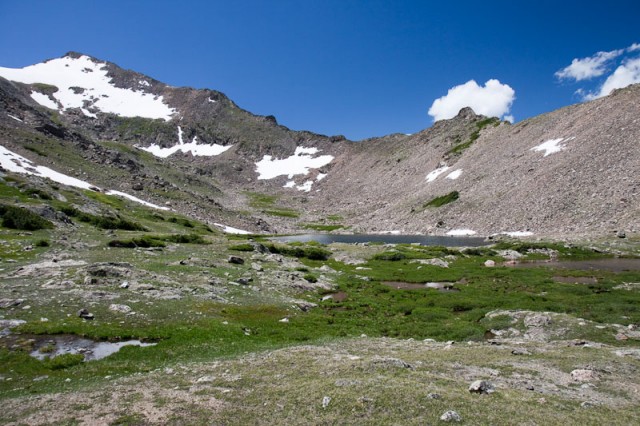 A view of the Continental Divide. The plane had crashed trying to get over this. The wreckage is between the snowfield in the center of the photo and the edge of the lake. (The wreckage is too small to be seen in this photo.)

Steven had told me about this wreck years ago and I added to a list of hikes I’d like to do one day.  I had forgotten all of the details like what type of plane was it, had anyone died in the crash, etc.  The only thing I did remember, it crashed in 1971. 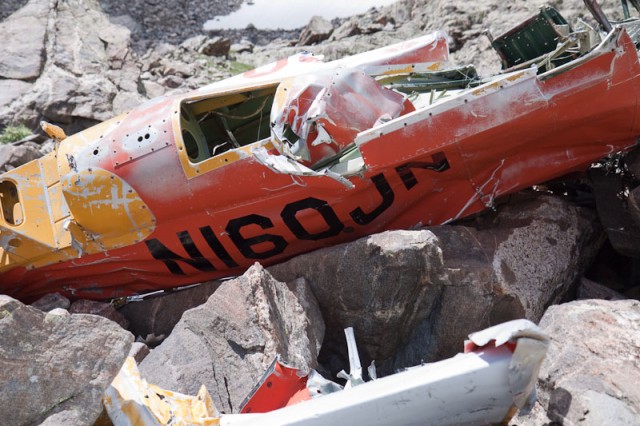 The rear half of the fuselage. 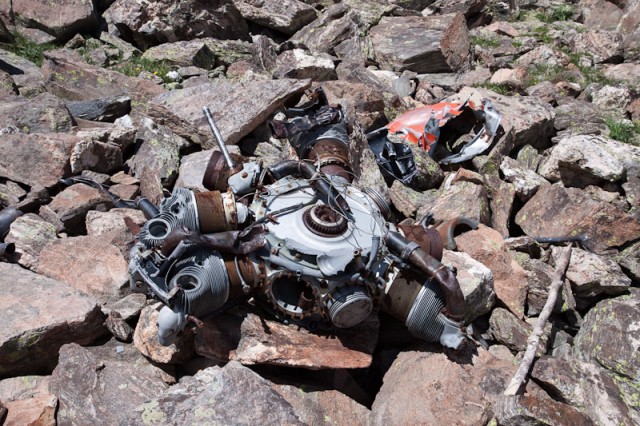 Since returning home, I’ve researched the plane which now gives me some perspective into the photos I took. The plane was an AT-6G used by the Air Force and the Navy to train pilots in World War II.  It was a stout plane containing two seats, one behind the other.  Here is a photo of what it looks like from Wikipedia: 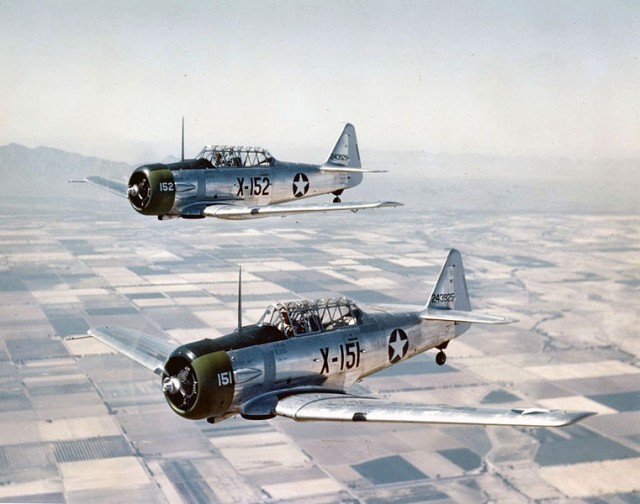 The plane was owned by a civilian pilot who had repainted it.  He was a 29 year old flight instructor with 4200 hours of flying experience, and 99 hours flying time in this particular plane.  He was flying from Denver to Steamboat Springs, Colorado.  The NTSB attributes the crash to pilot error and he did die in the crash.  Many planes have crashed along this section of the Continental Divide during the winter when there are strong downdrafts created by the wind blowing across the divide. 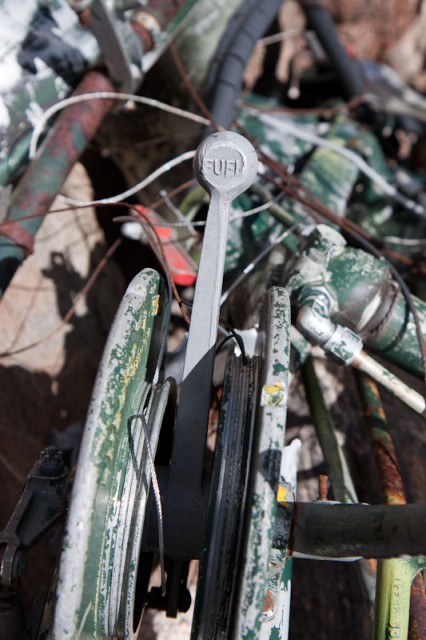 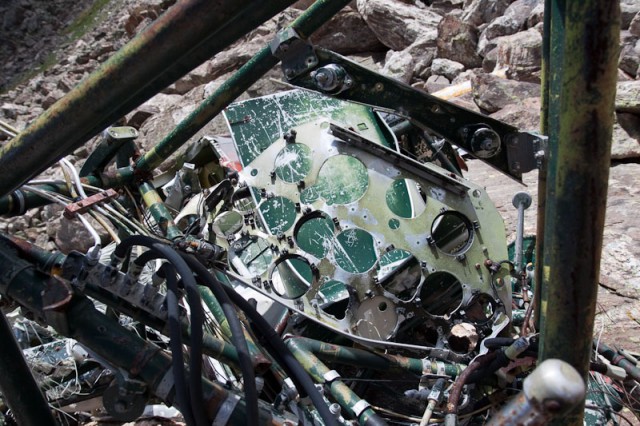 This is the rear control panel and the metal seat frame behind it. The gauges have been removed. 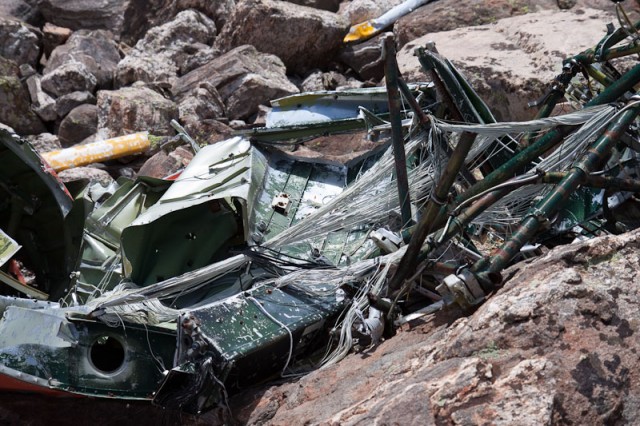 The wiring is still stretched like spaghetti through the fuselage.

The hike to the crash site was one of the most challenging and most satisfying I’ve ever done.  I had great weather as well.