I’ve made four loaves of bread using the sourdough starter I got from Whole Foods.  Two of those loaves were actually a single loaf dough divided in two, one kneaded more than the other.  I’ll come back to why I was doing that in a moment. 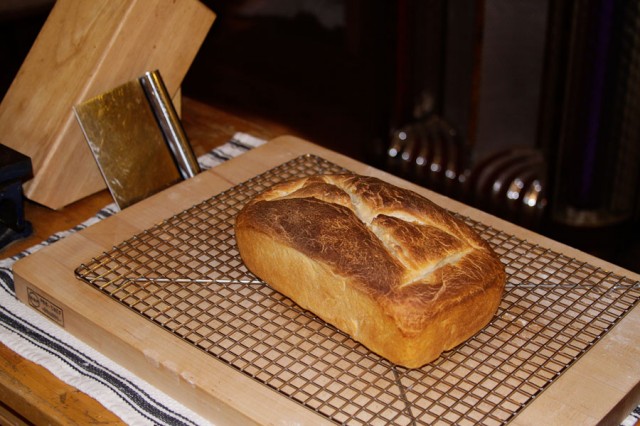 Loaf #1 with distinctive hour glass design in the top.

I’ve said it before, I love home-baked bread.  I’m also somewhat of a perfectionist, control freak, and an engineer. Combine that with something as variable and bratty as bread and it becomes an obsession to master it.  I’ve been baking bread regularly for 20 years and I’m still learning how to do it.

The overall procedure is a little different when making sourdough.  And sourdough starter seems to make the dough more sticky, confusing me when determining the proper balance between liquid and flours. All of this has me re-examining  bread making in general.  I’m living at 8300 feet in elevation, where the leavening power of either yeast or sourdough starter doesn’t have to be as strong.  I want to harness that advantage.

Loaf number 1 had great sour flavor, but it was a little dense and dry.

The next loaf I made, I decided to divide in two.  I left one fairly sticky.  For the other I added more flour and kneaded a little longer.  I baked them as rounds on a cookie sheet. The result:  the sticky one rose more and had a better texture, the opposite of what I expected.

Unfortunately I didn’t take a photo.  Friends arrived as the bread was coming out of the oven, and needless to say, there wasn’t much left by the end of the day.  One of those friends is another engineer.

But what about the science?

I said, “Mike, there are so many contradictions between science & engineering and cookbooks, it leaves me very frustrated.  It seems like so many things in the realm of cooking are handed down without really understanding why it is we do certain things.  Take for example the common rule that if you bake in a glass pan, you lower the oven temperature by 25-50 degrees.  Why is that?  Glass is an insulator compared to a metal pan, why don’t we increase the temperature to make up for the thermal resistance of glass?”

Mike looked at me while he thought up an answer.  He threw out a guess, but added he didn’t know.

I said, “Here’s another one.  If water boils at 190 degrees at this elevation, why does the Joy of Cooking say to increase the oven temperature at high elevations.  That would make the water boil out of the bread even faster!”

Mike said from his experience, there is a lot of technique used in making foams, and bread is just another form of foam, and some of those techniques are counter intuitive.  (It was a more detailed answer, but still didn’t directly answer the question, which I wasn’t expecting since I was simply venting.)

The next day I took to the internet and found more contradictions.  But I did stumble upon a book called Bread Science: the chemistry and craft of making bread.  Just what I need.  I ordered a copy and I hope it arrives soon.

I re-watched a saved copy of Alton Brown’s show Good Eats, wherein he makes bread.  If you’ve never seen an episode of Good Eats, Alton dissects the foods he makes and gives the viewers the associated history/scientific/engineering background.

Not all flours are created equal

One thing very important for bread is the protein content of the flour.  This is directly related to how much gluten the flour will make.

I’ve always used All-Purpose flour for my bread.  Sometimes I’ve added wheat gluten to give it a little boost, but the bread ends up too gummy.  Among All-Purpose flours, I’ve noticed big differences in how well they make bread dough.  Not all flours are created equal.

Everybody seems to agree that the better breads are made with flours with around 11-12% protein.   The All-Purpose flour I was using had 10% protein in it.  I went to the store found some that were as low as 8%.  The King Arthur Bread Flour had the highest at nearly 12.7%.  I picked up a bag of that, and a bag of the Bob’s Red Mill Organic Unbleached and Unbromated flour (protein is about 11.7%).  (You need a calculator to divide the number of grams of protein by the number of grams in the serving size.) 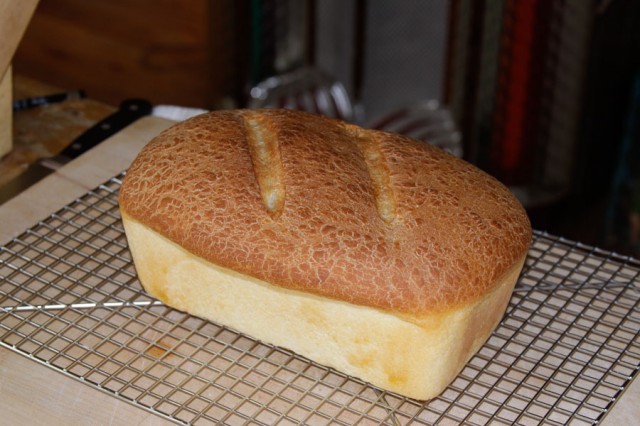 The next day I made Loaf Number 4 with the King Arthur flour.  The crumb (the inside meat of the loaf) had perfect texture for sourdough. 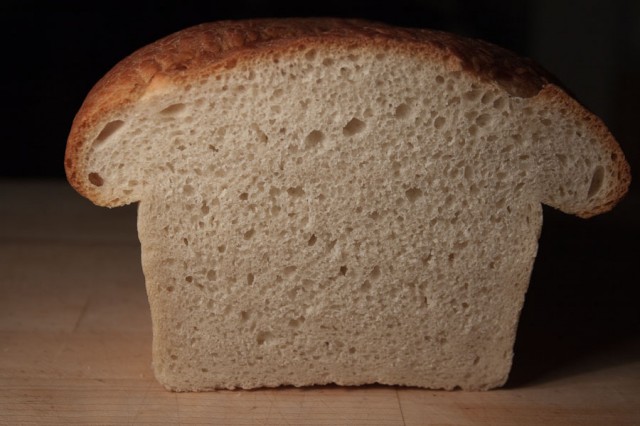 Nice texture for a sourdough. Firm, some bubbles -- a good sandwich bread. I've never been a fan mushroom shaped breads, I usually make round ones. But this will do for now.

However, the King Arthur flour had kind of weird smell to it, like mildew and old paint.  I checked the expiration date and it doesn’t expire for a couple of months, but I think it’s old.  The expiration on Bob’s flour is 2014, at least a year fresher.  So I think I’ll pick up another bag of King Arthur from a different store and see if has the same smell.   It might just be the natural flavor of a different strain of higher protein wheat that I’m not used to. In any case, the smell is hardly noticeable in the finished loaf, so I think the loaf is worth keeping.

The sourdough didn’t have a very strong flavor in this loaf, but that’s my fault.  I had put the starter in the refrigerator to slow down its metabolism because I wasn’t expecting to make another loaf so soon.

I’ve run across a term on the Internet — Artisan Bread Maker.  I might be one of those.  I think simple is better.  I make whole wheat bread the most.  Once I master the white sourdough, I want to make a whole wheat version.