I haven’t backpacked anywhere recently due to the weight of the pack and the ill effects it has on my knee and hip.  But I deemed the distance of about 2 miles round-trip, do-able.  Gone are the days of week long 35-40 mile trips into the wilderness. 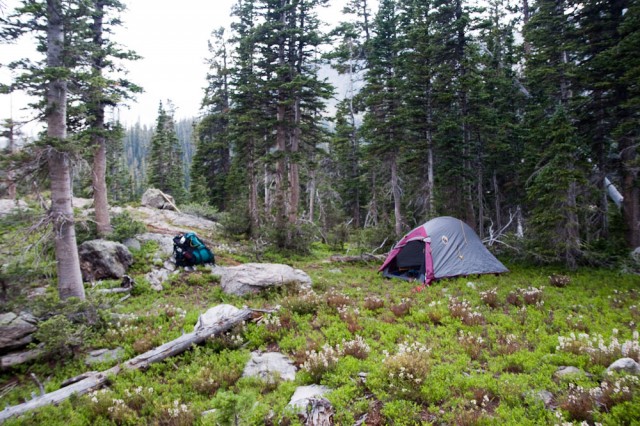 There were a lot of other people camping in the area (relatively speaking).  Access to my first choice was blocked by a tent.  I know the area well, so I went looking another spot, which ended up equidistant from three other tents, the closest being 100 yards.  I prefer a bit more distance from my fellow backcountry travelers. 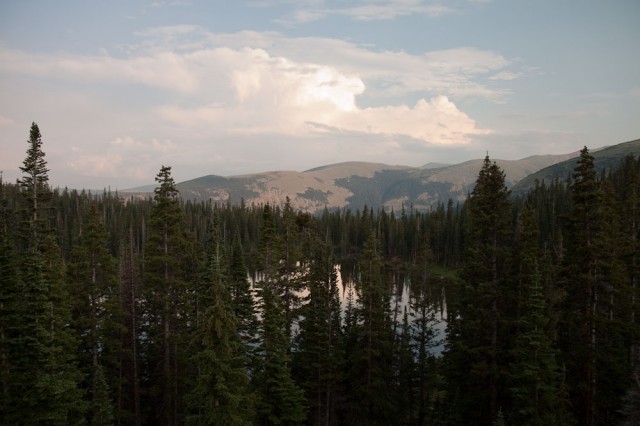 View from campsite with one of the lakes in the foreground

The weather was cold and damp most of the time, with occasional sun.

Even in areas I’ve been to previously, like this one, there’s always more exploring to do.  I hiked to a lake (pond?) that I hadn’t been to before. 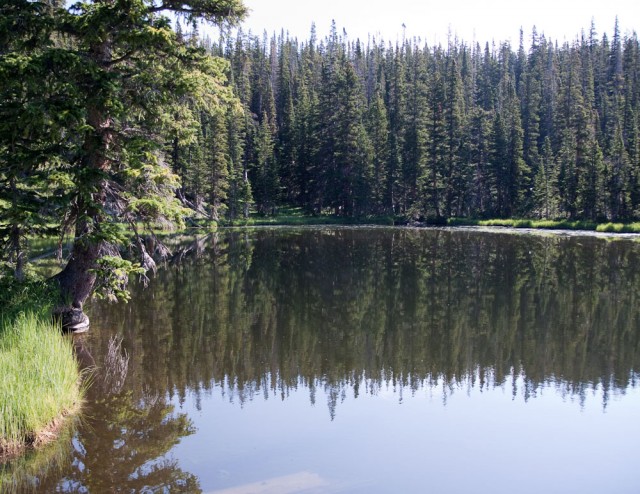 Unnamed lake. When does a pond become a lake? 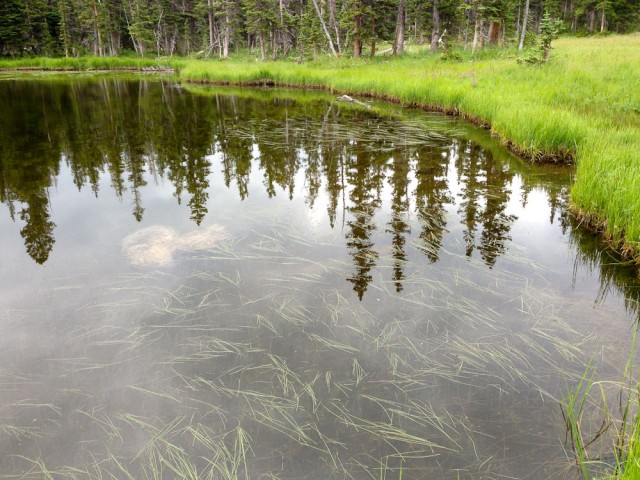 Mostly shallow, but teaming with wildlife

Away from the humans and their camps, this lake had much more wildlife surrounding it and in it.   There were grouse that startled me as much as I startled them when they unexpectedly flushed nearby.  There was the hide of a porcupine (no skeletal remains) nearby.   The grass was matted down in areas from large animals sleeping on it. Upon closer examination of the water, there were water beetles and eels swimming around in it, something I’ve never seen in a high-country lake.

The lake is mostly filled by a spring, where the water rises up out of a hole next to the lake.  Just before I discovered the spring, I was wondering how all these aquatic creatures could survive in such a shallow body of water, which probably froze solid in winter at this 10,000 foot elevation.  The spring, although not hot, likely stays above freezing all winter. 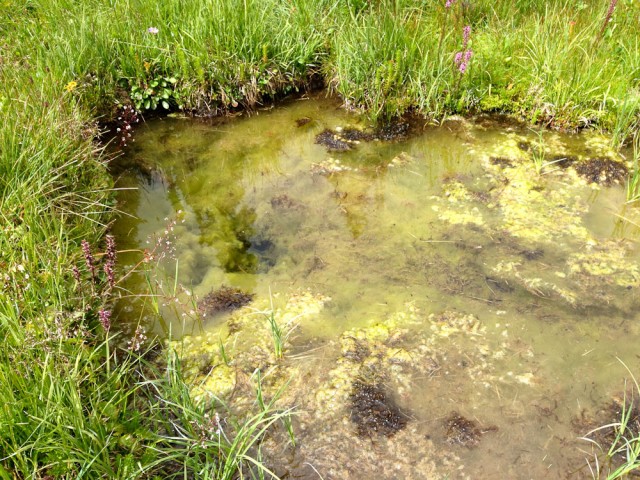 Spring that feeds the lake

The hole is surrounded by web of dense algae.  There are a lot of springs here in these mountains.  I always wonder about the quality of water.  Which one is better to drink from? Some springs are crystal clear.  But why doesn’t algae form or why doesn’t moss grow on the rocks?  What is it about the water that doesn’t support this type of life?  Then there are springs like this one, teaming with life.  Maybe this one is warmer?  I’ve decided to come back to this lake in winter.

It started to hail while I was exploring the shores of this lake.  I’ve never been next to a lake during a hail storm.  Sometimes you don’t realize you haven’t done something until it happens.  It was interesting, especially the sound. 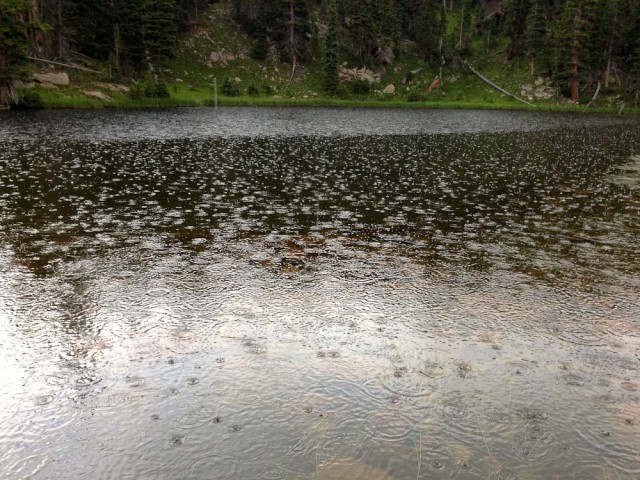 Hail falling into the lake

It was fascinating watching the hailstones fall into the water, almost hitting the bottom, then floating back to the surface and melting.

This lake is definitely a hidden gem for me.  In such a popular and busy area, it is off-trail and seems very isolated.  I will come back and camp here at some point in the future.

Also in the area is the route of the old railroad over the Continental Divide.  I spent some time exploring along an old snow fence that had been erected with large timbers that are slowly melting back into the landscape as they decompose. 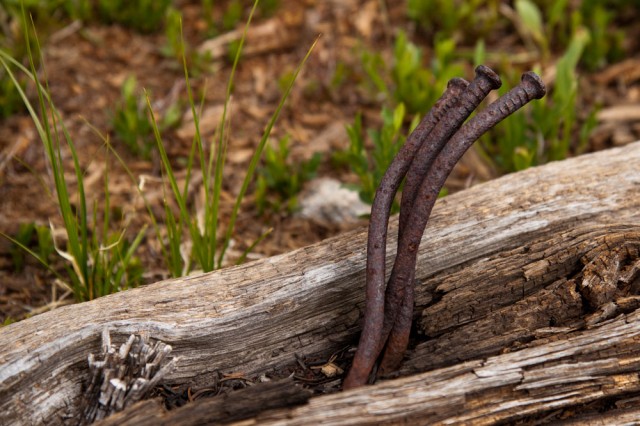 Nearby was an old campsite, probably used by railroad workers 100 years ago. 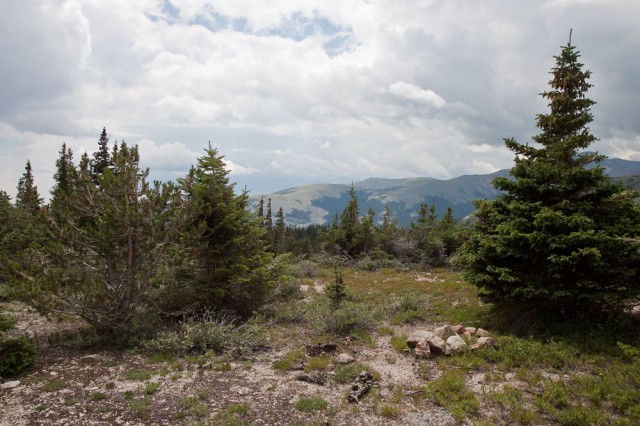 Old campsite near the snow fence 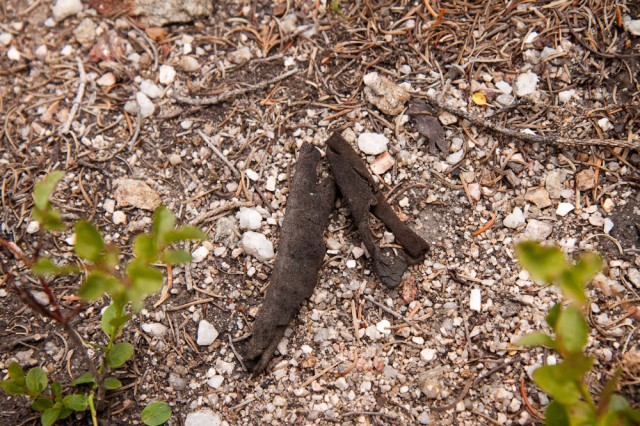 Old leather pieces. Hard to tell what they were originally. 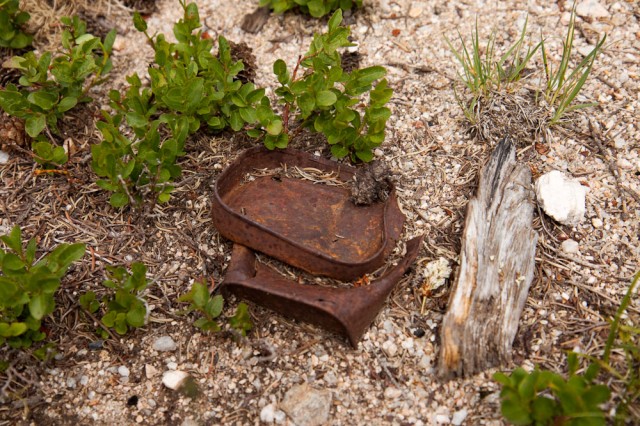 Hopefully it won’t be as long until my next excursion.