By now you’ve heard about the great Colorado flood of 2013.  The numbers for Boulder County:

I’m not sure about the numbers statewide.

Other than a leaking roof, where the water ran down into the wall and out into the closet and soaked the carpeting, I survived fine.  Throughout the flood, I was busy trying to meet a work deadline amidst power outages.  The entire week was a bit surreal.  Rain was falling each day and I was given a nearly impossible printed circuit to design in a nearly impossible time frame.  Actually it was four circuit boards, but I only completed two.

The biggest inconvenience has been transportation.  It’s now nearly two weeks after the flood and the main roads in and out of the area are still closed.

I wish I had some spectacular photos to share, but there was never any time to go out and take photos.

I am tired of all of the hyperbole in the media regarding this event. There is so much misinformation and comparisons of apples and oranges.  So I’ve pretty much stopped keeping up on things.

Fall is a bit late this year, very little color has developed so far.  Given that the peak of the wildflowers were a couple of weeks late in mid-summer, followed by the peak mushroom season being late, I can conclude that Fall will be a bit late.

I don’t think the heavy rains portend a bad winter.  The monsoon and winter weather patterns are nearly opposite of each other and different forces are in play.   Prior to the heavy rain storm, the monsoon was running pretty close to average.  So therefore I’ll bet winter will be average, if not a few weeks late getting started.

END_OF_DOCUMENT_TOKEN_TO_BE_REPLACED

One thing that I frequently encountered on my trip to the sunnier and warmer regions to the west, was a sense of weather superiority.

Family and friends would brag about the temperatures and the sunny days, as if I should be relieved and lucky to escape the snow and cold.  Admittedly, the reason I took the trip in mid-winter was to take a break from the wind.  (The local weather statistics keeper wrote that January had 23 days of winds over 40 MPH.) But, over time, I’ve largely become indifferent to the wind (especially this winter with the purchase of some new outerwear).

I had the impression they thought I was suffering living here in winter.   I’m not.  I love the snow.  I love to watch it fall.  I love to put on my snow boots or snowshoes and go into the forests.  I love the way snow erases the details of the landscape, making it all smooth and new, like taking an Etch-a-Sketch and turning it over.

And one countered, “well, that’s because you don’t have to drive in it on a daily basis.”  That’s not true either.  I don’t mind driving in it.  I do mind when everybody else is driving in it at the same time.  And again, it’s not winter and snow that makes it bad, it’s the traffic.  I love driving on snowy backroads because there is no traffic to deal with. My car/suv/tires handles the snow and ice very very well.  I argue that sitting in traffic in the middle of summer is just as aggravating.

Winter here is not suffering.  It’s just different.  When I go outside, I put on a coat.  Instead of wearing shorts and tennis shoes, I put on long underwear, long pants and boots.

Really the only thing about winter I don’t like are the holidays.  I think that would be the case regardless of where I lived. 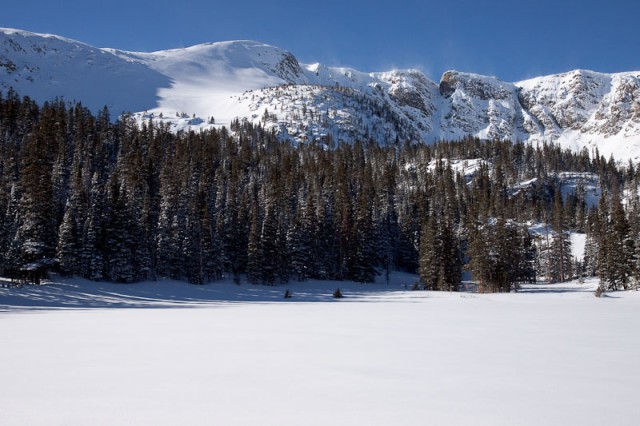 One of the Forest Lakes and the Continental Divide