One of the very cool things I can do with the iPhone 5 is eliminate carrying a separate GPS receiver when I’m hiking or biking.

I downloaded an app called Gaia GPS.  It turns the iPhone into a full featured GPS.

The big improvement this has over my old Garmin eTrex Legend is the ability to display the underlying USGS topo maps for no additional cost.  In the past, access to USGS maps for my computer was hundreds of dollars (keep in mind these maps are created by the government at taxpayer expense). 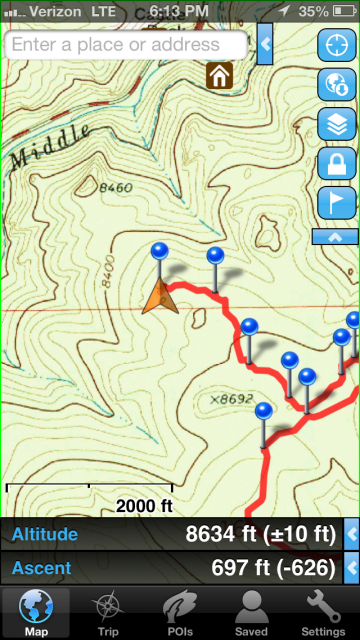 So in effect, this app also replaced the combination of using my laptop with the Garmin.  All for $20.

Normally the app pulls the maps from the internet as needed for an area, but it also has the ability to pre-download maps for an area for use where there is no cell signal.

Another plus, I was able to transfer all of the routes and waypoints stored in my Garmin to the app.  That’s about 7 years worth of stuff, most of it “off the beaten path”.

On a lot of the local trails, I like to mark trail junctions because in the winter you can’t see the trail under the snow.

I won’t go into everything the app can do, but it does everything my Garmin could do. 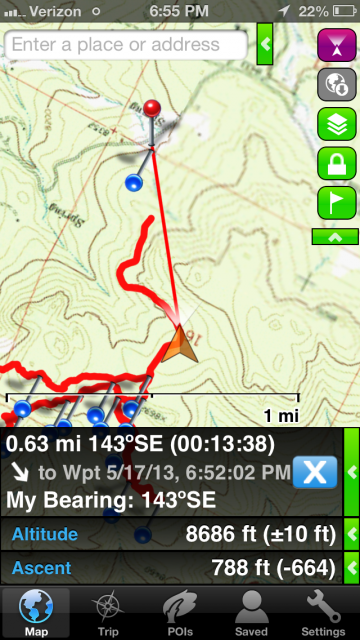 Here, the app is guiding me to a waypoint that I created on the map.

The big downside is the battery usage.  This is not the fault of the app.  It’s because the phone is not optimized for GPS only usage.  Recording a track is the biggest battery drain.  On a full charge, I estimate 4-6 hours of track recording.  Definitely not for backpacking use, where I’d be without power for days.

However, the app does have a variety of power saving features that will stretch out the battery life for a full day of hiking, but nothing compared to weeks of constant use my old Garmin can do.  But for 95% of what I do, it will be an improvement over the Garmin.

Coupled with an Otterbox Defender case, I’ve got a fairly durable GPS for outdoor use.

I’ve painstakingly moved all of my web, streaming, and e-mail to another server.  I say painstakingly because it was actually two separate moves, but that’s another story.   The moves have made me take a closer look at the performance of the server and the resources that my sites use (seven, plus several others I host for other people).

It seems a shame to me that 98% of the traffic (just a guesstimate) in and out of the server is all hacker or spam related.   I’m basically paying for memory, disk, CPU and data transfer to support that.  If I only paid for resources for legitimate use, the illegitimate stuff would use it all up, not leaving anything left over.

The number one processor hog is the firewall system to protect the server from break-in attempts.  The number 3 spot goes to the spam detection system.

It almost seems like there are more cyber criminals than real-life criminals.  But I think its a distorted way of looking it at.  A single cyber criminal can make a virus that infects people’s computers so that he/she gains control of an army of computers. This army is then used to scour servers like mine for vulnerabilities or to send spam.  According to my server logs, most of the infected computers are outside of the US.  Just this morning I saw spam attempts from computers in Mexico and Brazil.

So my server spends most of it’s resources protecting itself from robot computers.

In spite of all that, it appears everything is running smoothly.  I’ve also added the link to the sidebar for my streaming radio program, which will resume in a week or two.  Hopefully that will run smoother as well.

Edited to add:  I will try streaming a live Road Trip show as a test, this evening at the usual time.

I decided this town would be a good fit for a small town radio station, much like the one portrayed on the TV series Northern Exposure.  Later my friend Daoine O’ became a DJ at the station near her small town.  I got to see the studio and even trekked up a mountain side to the transmitter.  I was inspired.

So I set out writing my congress critters, pleading with them to pass the bill that had been lingering for years in their committees.  The bill was to reverse a law that stopped new LPFM stations from being authorized (long story, short).  It took years for the bill to finally get passed in 2011 and signed by President Obama.  Now the FCC is busy trying to make sense of the bill and adjust their rules accordingly.

Unbeknownst to me,  probably in 2010, a couple of people from town simply put together a studio, put up a pirate transmitter someplace and voila, they’re on the air and streaming.  They’ve had in-studio guests and broadcast live from various venues in town.  It has a local vibe to it.   I admire them and the simplistic route they took to start a station without all of the bureaucracy and regulations of the government.  They are not interfering with any other radio signals.  They are polite pirates.

Is it a community radio station?  Not quite.  Members of the community interested in doing a radio show, can’t.  Also, it’s only live on the weekends.  As far as I can tell, weekdays are just pre-programmed with a playlist of music.  I’ve tried contacting them, but haven’t received any replies.

At the beginning of the year, my friend Jacob asked for my help in setting up a podcasting studio in his home.   We picked out equipment, set it up, tested it, and now I’m the recording engineer for the bi-weekly podcast Radio Golden.  This was my introduction to podcasting in general and through him I was introduced to other podcasts to listen to.  One of my favorites so far is Radiolab.

Last summer I started streaming my own weekly radio program called Road Trip.  It’s not a podcast yet, you have to listen to it live on Friday evenings. To stream this program requires no bureaucracy or government approval.

Is anybody out there?

I wrote a letter to the local newspaper calling for people interested in starting a radio station to contact me.  The response was lukewarm.  I received about four replies, most of them wanting to have their own radio show.  But no one seems very enthusiastic about trying to work through the bureaucracy of actually making the station a reality.

There is a lot that has to be done:

If the FCC application is approved, there is even a longer list of stuff that needs to be done, more applications, fund raising to pay for equipment, etc.  If only four people responded to my call for volunteers, what’s fundraising going to be like?

I’m not the kind of person who likes bureaucracy.  (I can’t even spell it.)   I see the simplicity of using the internet as a means of audio transmission and I wonder if it’s the future.  I ask myself, why do I want to jump through a bunch of hoops and pay a bunch of fees just to satisfy some romantic notion I have of radio?  While I have some friends who are supportive of my radio station idea, I don’t know enough locals who are enthused enough to really bond over the idea, to keep the momentum going while getting through the bureaucracy.   It needs to be a team effort and there is no team.

If I scrap the traditional radio idea, I will also scrap the community radio idea.   If I go with the internet transmission method, then I’m going to join up with my music geeking friends and create a station that is not tied to location.  For all the fees I would have paid with submitting various government applications, I can buy each of them mics and mixers.  That would be just as fun as my old romantic notion of radio.