As I quipped on Facebook recently, I’m often mistaken for a musician.

Attending NedFest this year inspired me to give being a musician another try.  Maybe it was the old Hammond C3 on stage, the relative ease that musicians could play in each other’s bands, or just the simple fact that everyone was having fun playing music.

I have three previous attempts at learning a musical instrument in my history.

The first was piano lessons at some point in my early childhood, probably age 7 or so, given to me by my step-mother. I barely have any recollection of these, and for all I know, they may have only lasted a month.

The second attempt was guitar lessons at about age 12.  My mom rented a guitar for me and signed me up for lessons at the local music store.  The teacher was more interested in killing time by noodling on this guitar.  During those months I was not taught a single chord.  I did learn to pick out Jingle Bells and Norwegian Wood, but it was mostly scales and rudimentary mechanical stuff.  I lost interest pretty quick and the guitar was returned.  Although I could barely play it, I loved that guitar and was sad to see it go.

The third attempt was made as an adult, in my early 20’s.   By this point I had owned a couple of synths and a sampler, but I was more interesting in programming and sampling different sounds.  Even before that, I had designed my own synth, sequencer and a drum machine.  It was high time I created something that would pass as music.  So I signed up at the local community college for group piano lessons.  We each had a Rhodes electric piano and a pair of headphones.

At the end of the semester, I pretty much hated the idea playing anything on a keyboard.  I concluded that I didn’t have the coordination to read music and control my hands doing separate tasks.  Looking back, the only thing that stands out in my memory is playing scales over and over, doing various exercises and playing the song I had to be proficient at by the end of the semester.  (I don’t remember what song it was, which is surprising because I remember hating it because I played it over and over and over and never became good at it.)

All three of these attempts have some things in common.  They started from the same place of learning exercises over and over and over, like playing scales.    It was so boring.  I remember practicing one evening and literally falling asleep while I did.  They taught the mechanics before the music.

But I wanted to learn to play music.  I wanted to know about chord progressions.  I wanted to know what makes a song. The epiphany I had at NedFest was that I need to try again, but this time to teach myself.  It’s not that hard. I’m an engineer. I can do this. I need to start with my interest in music and let that drive my need to learn the mechanics and technique.   I need to decontruct some songs that I like and find out how they are put together tonally and rhythmically and put them back together again.

I believe most everything else I need will fall into place with time.  At least that’s my hope.  And I think it will be a more enjoyable experience.  So even if my musical coordination turns out to be impaired and maybe I’ll never be able to play two-handed and read music a the same time, at least I’ll have control over the learning process based on my interest and abilities; I’ll learn the stuff I can do. 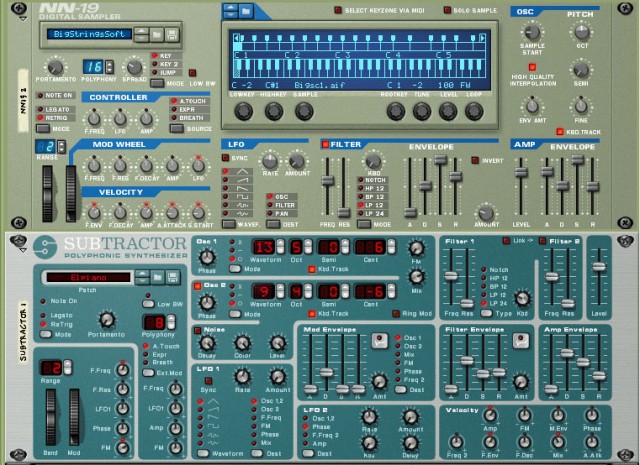 One of the samplers and analog synths in Reason 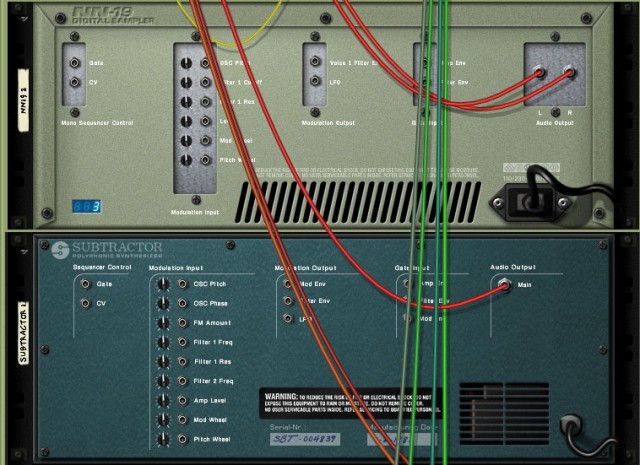 I like how I can make connections on the back side.

I already have Reason 4, which contains a virtual rack of keyboard synths and drums.  I bought this with my econmic stimulus check a few years ago.  And, I have a 44-key MIDI controller for playing it, although at some point I would like to upgrade to a 61-key keyboard.

I’ve had all this for a few years now but have rarely taken the time to do anything with it.  With winter approaching, it seems like a good time to re-embark on this endeavor.  I don’t need to be in a band or be proficient enough to play on a stage. My only goal is to make music.

4 thoughts on “Mistaken for a Musician”