One thing I like about the trains that run through the mountains here, is that it’s living history.  The Union Pacific Moffat Subdivision (as it is known today) was originally built around 1903 and is still in use today.  That makes it roughly 110 years old.

On September’s outing with Rob and Sherrie (I’m a little behind in updating this blog), we picked up where we left off from our July outing when we explored the eastern side of Moffat Tunnel (6.1 miles long, under the Continental Divide) and the old route over Rollins Pass. 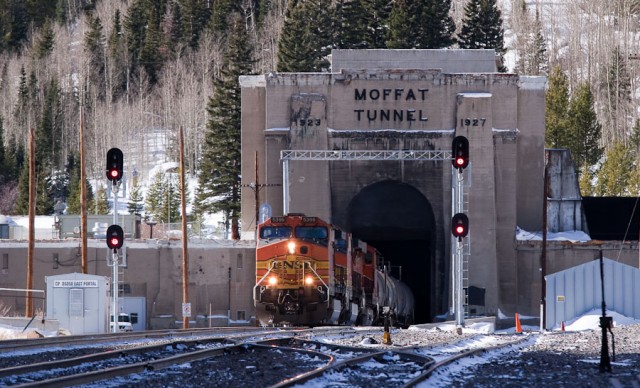 We headed over to the west side of the Moffat Tunnel, in Winter Park.   As luck would have it, we caught Amtrak’s California Zephyr emerging from the tunnel. (It helps to have a scanner radio to hear the train communications.)  Compared to the east portal of the tunnel with is large concrete structure and huge venting system, the west portal is unassuming. 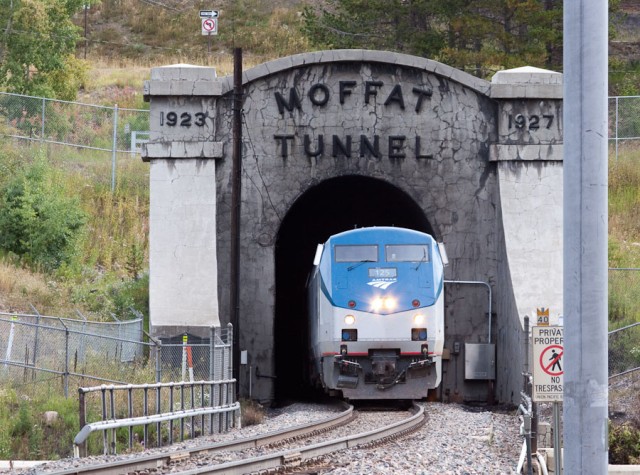 Because this is a photo heavy post the rest are behind the cut.  And some of these photos benefit by clicking to see the larger versions.

We followed the Zephyr down to Fraser, where it was forced to sit while there was track work ahead. 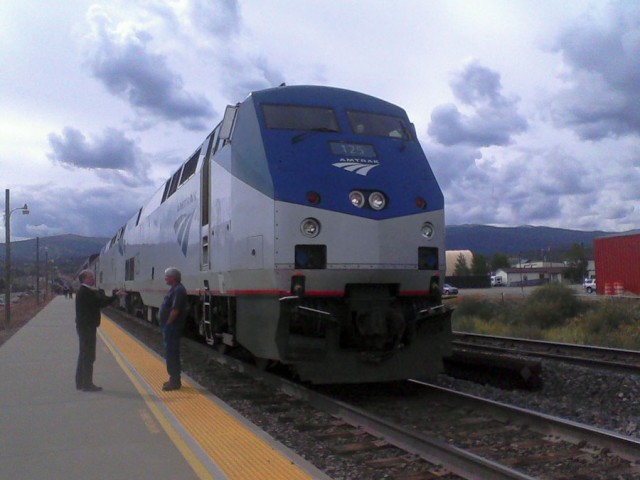 Westbound Zephyr at Fraser. Photo courtesy of Sherrie and her phone.

The guy on the right is the train driver.  He looks pretty small compared to the massive engine.

Before the Moffat Tunnel was completed in the 1920’s, the trains had to work their way up and over Rollins Pass, there the weather was very harsh in the winter.  We followed the old train grade up to the pass from Winter Park, looking for old townsites that don’t exist any more. 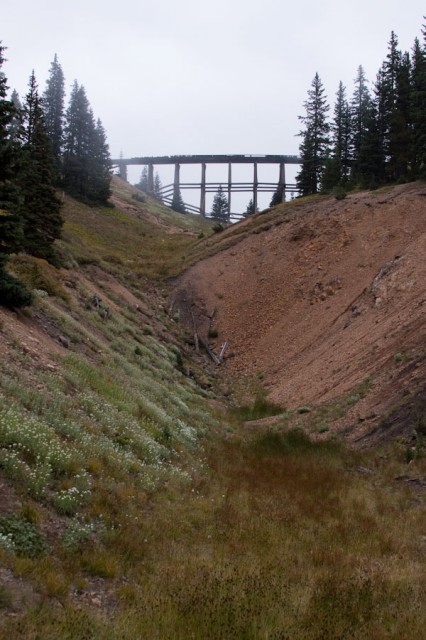 Bridge over the Rifle-Sight Notch. The tunnel underneath collapsed long ago (center of photo).

Because the area was so steep, the train looped over itself. 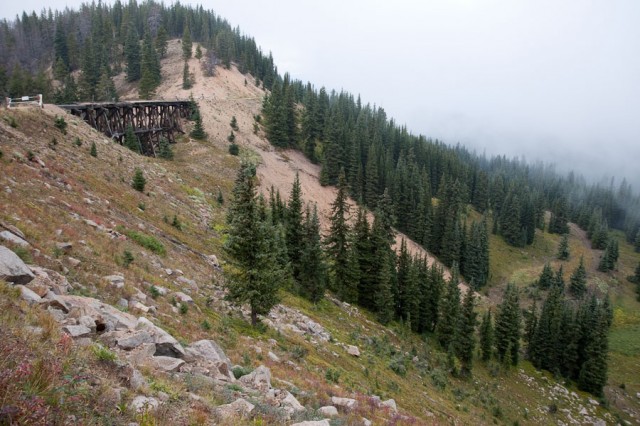 Rifle-Sight Notch with train grade to the far right.

An uphill train would approach on the barely visible grade on the far right and pass through a tunnel under the bridge heading to the left.  Then it would wrap clockwise around the hill and cross the bridge. 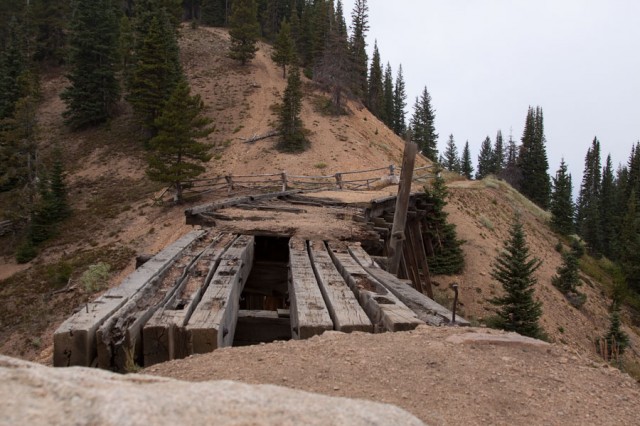 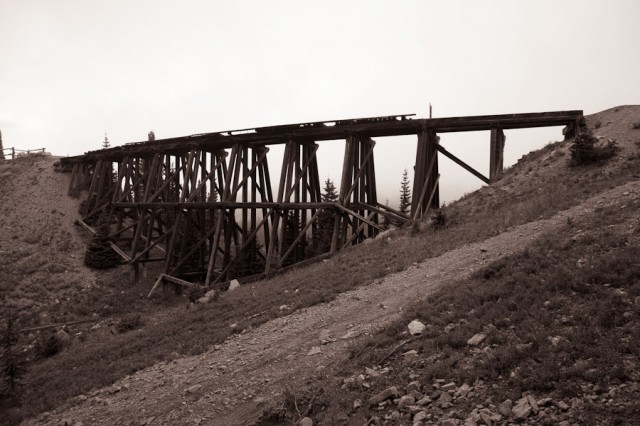 About a week later, I took a trip to southwestern Colorado.  I decided to take the long route via the back roads that run along the Colorado River and the continuation of the Moffat Route from Winter Park to Glenwood Springs.

As with many places along the route, the trains pass through some spectacular scenery.   The construction of the route was arduous. 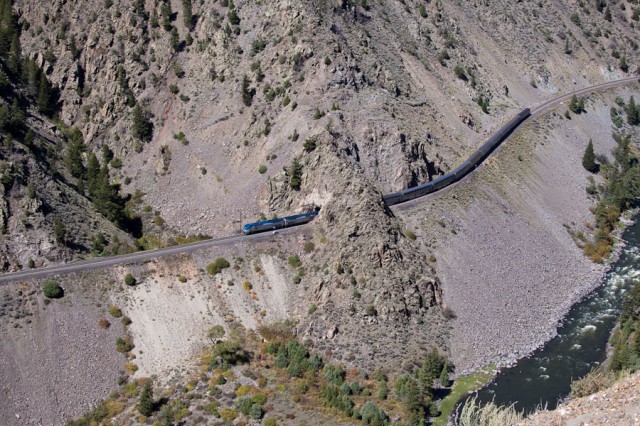 Amtrak's California Zephyr descending through Gore Canyon. The Colorado River is on the right. 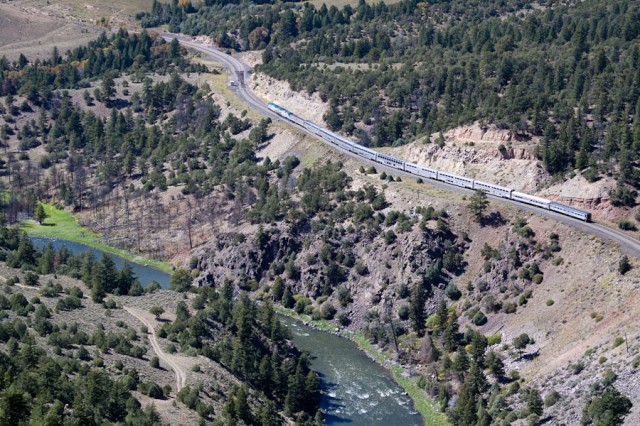 Azure siding at the end of Gore Canyon 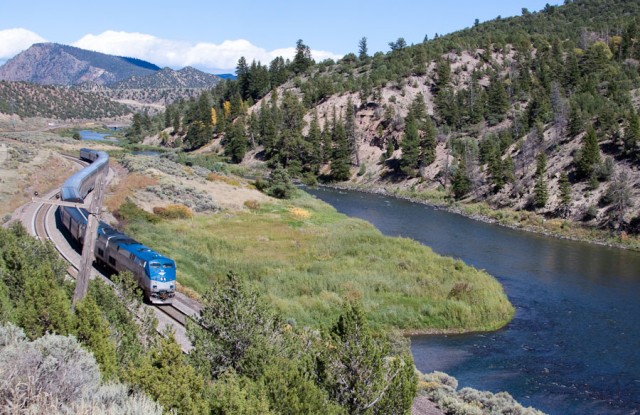 As one heads downstream the cliffs become more red. 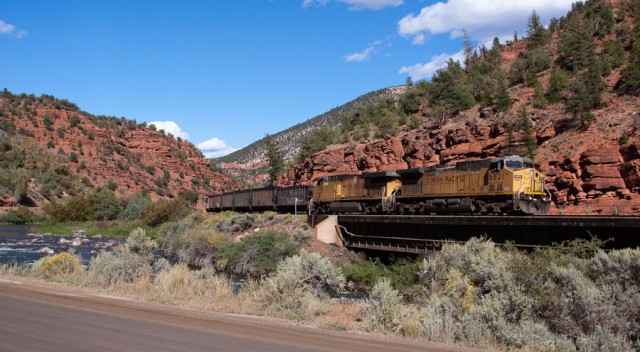 One of these days, I’ll take the Zephyr to Glenwood Springs or all of the way to California and get some photos from the other perspective.