This website is not “mobile friendly”, and I’m trying to decide whether it should be.  It would mean a re-design.

Leading up the election, I felt I was participating in too many things that go against my values, which ultimately go against my spirit and what makes me, me.

I try to be a careful voter, studying the ballot and voting my conscience.  It took me weeks to vote this year’s ballot.  If I wasn’t sure about something, I’d leave it blank to come back to it several days later after more research or mulling it over.

The vote for president was one I left blank for a long time. It was not because I was sitting on the fence.  I hated both candidates.  I kept wondering, “Is this the best our country can do?”  I have many liberal friends and according to them I should be voting for Clinton to keep Trump from winning.  But I couldn’t do that. I can’t vote for someone I don’t like and I can’t vote for a reality TV star. I was so fatigued from going against my conscience, I decided I needed a change.

One of those changes was leaving Facebook.  Every time I logged in, I felt I was participating in something that was similar to selling my soul. Very much like voting for someone I don’t like.

I left Facebook right after the election. Not that I was ever really there (for example I never installed the Facebook app on my phone).  But it didn’t really boil down to blaming my friends.  Yes, I blame them for (re-)posting so much propaganda, without checking the facts, just for the purpose of inflaming the other side. But the big blame goes to the Facebook corporation itself.

There are three (ok, four… no, five… wait, six… ugh, seven…) things that just infuriate me about Facebook.

The biggest thing I hate about Facebook is there is no transparency about the algorithm used to decide which posts to show in the news feed.  Over the years there are have been articles detailing psychological experiments that Facebook allowed researchers conduct on the unknowing user base. I’ve noticed certain things I’ve posted are effectively censored.  After a while I began to sense, even before I would post something, whether it would get censored or not. I’ve asked friends, “Did you see the thing I posted about…” and the answer was “no”. Along the same lines, the posts that interested me the most were buried in my newsfeed. That might have been intentional to get me to spend more time on Facebook digging for those nuggets.

Only short and sweet posts make it through to people. This very effectively dumbs everything down to expressing ideas or thoughts in two quick sentences. No different than what our mainstream media has become: inflammatory or sensational headlines and sound bites. No wonder everything has becomes so polarized.  No wonder this election was the ugliest and most unpleasant I’ve ever experienced.

Many things that my friends would repost were from non-reputable URLs, which would look like a news site, but wouldn’t contain anything factual.  Clickbait. Here’s an article about the “filter bubble” where Facebook only shows people what they want to see and how it influences things, Bursting the Facebook bubble.  I’m surprised at the number of people who only get their news through social media.

In the 1990’s and 2000’s, I would get a lot of forwarded emails from friends, which had been forwarded to them from their friends, etc.  These emails were often hoaxes, which gave birth to the hoax busting website Snopes. These messages had a life of their own, sometimes resurfacing years later.  Facebook is essentially the same thing, sharing stuff that may or may not have any factual basis. It’s a very low level of quality.

The final nail in the Facebook coffin was they kept locking me out of my account because I’d clear the cookies from my browser.  Having designed a number of websites, I know a few things about website security. But Facebook had some really bizarre ways of verifying my identity to restore my access to the site.  The primary one was I had to identify friends in various photos. But the photos they’d show me were probably photos their own facial recognition algorithm needed help with, like baby photos, or when a friend was wearing makeup for Mardi Gras or Halloween.  It was just ridiculous.  You’d think that 3 photos would be good enough, because anybody who was actually hacking my account wouldn’t be able to get that far, but no, it was 5 to 7. When my bank thinks there is something suspicious, they just send an email to my registered email address with a code or they ask a security question.  Much less creepy, a lot more transparent and simple.

Leaving Facebook feels like an amputation, because for a certain core group of friends, this is the only way we keep in touch.  I hope to replace it with spending more time with my friends in person or more direct ways of electronic communication.

Some friends took me to a concert last night in Denver (Ghost, which is probably described as death metal or death pop) and by the time I got back up to my home in the mountains, it was well after midnight.

This morning I decided to go to the Sundance Cafe for breakfast. I rarely go out for breakfast, but when I do, it makes the day special.

Even though I didn’t know anyone, when I looked around the restaurant I saw mostly locals. I’m not sure how I can tell. Maybe it’s the practical clothing and the lack of style. I think it’s the winters that make us that way, where all the trappings of the city are put aside for survival. In January, when the winds are howling, I just stop caring about style and wear whatever will keep me warm and dry.  I remember one night my first winter up here, I was startled when getting out of my car to go into the house. The wind was carving the snow into a moonscape and it was bitter cold. The cold was now serious business.

And the couple sitting at the next table somehow knew I was a local, too, because they struck up a conversation with me of local topic. All of the other conversations I overheard were about local topics as well. Perhaps it’s just because the locals know if you’re going to eat out on a weekend, breakfast is the only option before the hordes of tourists drive up from Denver.  By lunch time, the cafe will be packed and with a waiting list.

Even though I’m not very active in the local community, I am still part of it. 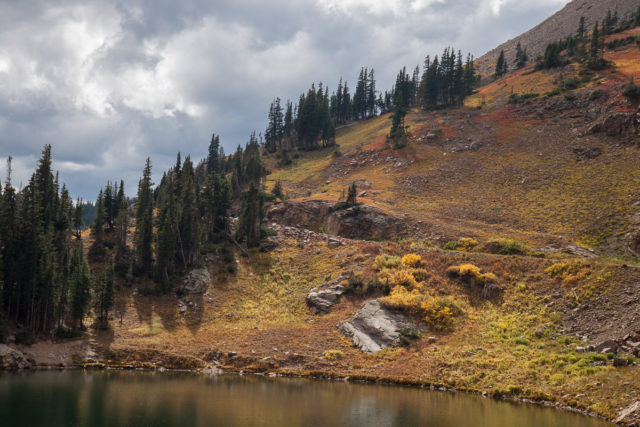